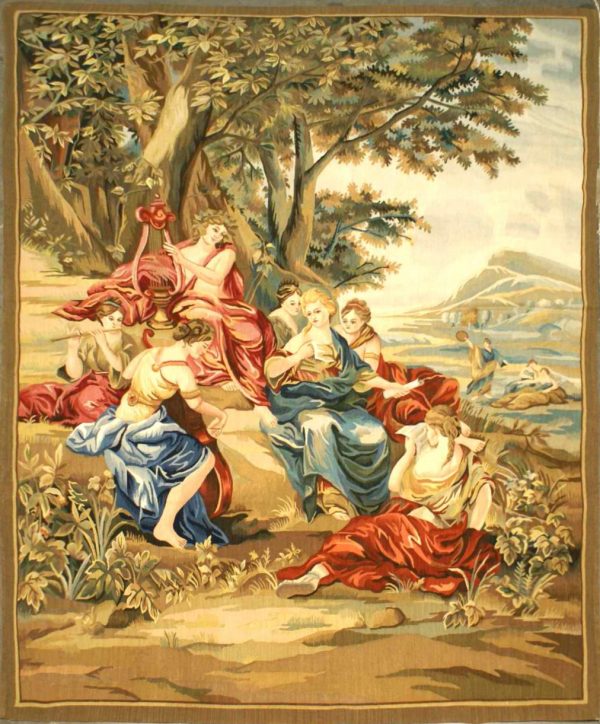 A centuries-old tradition, the craft of Aubusson tapestry consists of weaving an image using processes practised in Aubusson and a number of other localities in the Creuse region of France.

Aubusson tapestry can be based on an image in any artistic style, prepared by a  designer. Weaving is done manually by a lissier, or weaver, on a loom positioned horizontally, working on the reverse side of the tapestry, and using yarns that are hand-dyed in house.

This process is time-consuming and expensive. The Aubusson tapestries are a gold standard throughout the world, to the extent that Aubusson has become a common noun in some languages.

See How They Are Made Here

Apollo was a god in Greek mythology, and one of the Twelve Olympians. He was the son of Zeus and Leto and the twin brother of Artemis.

He is known as the god of healing, medicine, archery, justice, prophecy, music, and poetry.  During the 5th century BC, Apollo became also known as the god of Sun, becoming one with the god Helios, and getting the name Phoebus. He is often depicted as a young man, wearing a laurel wreath and playing the lyre.

Being the god of music and poetry, this makes him popular choice in Renaissance Style decorative arts.

The Renaissance, which lasted from 1490 to 1527, produced influential artists such as da Vinci, Michelangelo, and Raphael, each of whom brought creative power and spearheaded ideals of emotional expression. Artwork throughout the Renaissance was characterized by realism, attention to detail, and precise study of human anatomy. Artists used linear perspective and created depth through intense lighting and shading. Art began to change stylistically shortly after the Renaissance, when clashes between the Christian faith and humanism gave way to Mannerism.

To Learn More About the Renaissance Period Here

Tapestries in the Renaissance Era was the symbol of wealth and power favored by the Royal Courts all over Europe.

The notorious Prince of Renaissance, Henry VIII, has a collection of 2,700 tapestries divided among 14 palaces which was typical for the age. If placed from end to end, it would stretch an estimated 5,000 meters in length. Most of these were commissioned by the King him self including 20 gold woven sets. These commissioned figurative were designed to substantiate his new status as the head of the Church of England.

The Pope Leo X, commissioned Raphael in 1515 to design a set of tapestries for the Sistine Chapel depicting scenes from the lives of apostles Peter and Paul. He later ordered 2 more tapestries with imagery designed to show the power of the church at a time when it was threatened by the Turks. The Acts of the Apostles were displayed in the Sistine Chapel on December 26th 1521 and were considered the Finest Things of Its Kind.

This is a beautiful Gobelins weave tapestry. Newly made reproduction using 100% New Zealand wool on cotton foundation. It took months of hard work to finish. It was hand-woven exactly as in France centuries ago. The original tapestry made in France, if you could find one in the market, sells over ten times more expensive. You may find the original tapestries in museums, palaces and antique auctions.

This tapestry makes a great gift for your family or friend. A treasure to pass through generations. You have to see it in person to appreciate its magnificence! You will not regret owning such a beautiful artwork. Decorate your house like the wealthy do. It makes an eye catching focal point & a great conversation piece.

Please note that the tapestry was not laid perfectly flat when these pictures were taken. The warped lines are not a defect, but only a result of the fold lines. The crease will disappear after a few months. Or you may use an iron.

Colors and brightness may vary due to settings of your monitor. We will provide more pictures on request.

If you wish to order a custom made tapestry, you may send us a high resolution picture and contact us for a quote.

History: The original tapestry was handwoven by Manufacture Des Gobelins, a tapestry factory located in Paris, France, at 42 Avenue Des Gobelins, near the Les Gobelins Metro Station in the 13th Arrondissement. It Is probably most famous for being the supplier of the French Courts since the time of Louis XIV. In the fifteenth century a family of dyers established themselves on the banks of the Bievre River. In 1602 Henry IV rented factory space to enable his tapestry makers to produce tapestries. It is now state owned and run by the French Ministry Of Culture.

Hand Woven Vs Machine Woven Tapestries: The handwoven tapestries are woven by skilled artisans one at a time. They are hand-crafted of 100% wool, or wool and silk, and tend to have a wide range of colors. In addition, they have subtle variations of specific colors, giving the design great detail. Whenever you come across a hand woven tapestry, you will know right away. They have a completely different look and feel to them when compared to the ones made by machines. The biggest problem that people have with a machine woven tapestry is that they normally will look flat because of the way that the stitching is with these types. The biggest benefit to a machine woven tapestry is the fact that the distributor can make many more at a time. This means that there is more selection and more inventory that you will have to choose from. And you will more than likely not have to pay as much. However, you will be losing some of the beauty and detailed designs that you can expect from a handwoven tapestry. Many people preferred to have a tapestry that was handwoven. It basically comes down to what it is that you want. Chenille tapestries and jacquard-woven tapestries are machine woven. You may easily tell a hand woven tapestry from a machine woven tapestry by looking at the hand craftsmanship from the back of the tapestry. Compare them for yourself before deciding.